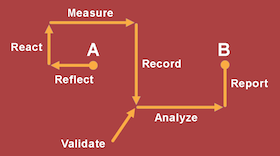 Why are we not further by now?

The entire assessment enterprise described in this site is driven by one burning question - “Why aren’t we further along in the assessment of student learning in Higher Education by now?”

The assessment of student learning is as old as education itself. Even the term assessment has an ancient origin - the Latin term assidere, meaning to sit beside. The modern movement for the assessment of student learning in Higher Education, however, has a much more recent origin. In the later part of the twentieth century the benefits of higher education, once assumed to be intrinsically ensured, were beginning to be called into question1. Two different, and somewhat competing, courses of action were proposed to address this perceived need. The first approach, typified by To Reclaim a Legacy2, focused upon curricular improvements. In this work, the faculty and administrators within Higher Education were called to sit down together to improve the pedagogy and learning assessment processes within their programs. Such studies viewed assessment as a process that is internal to the institutions. Others saw assessment as an external measure of institutional effectiveness. This viewpoint is exemplified by A Nation at Risk3. It is into this milieu that the origins of the modern assessment movement in Higher Education can be traced. The National Conference on Assessment in Higher Education was first convened in 1985; this is recognized by many people as the birth of the modern assessment movement4.

Many of the initial drivers for assessment in Higher Education came from external agencies. At first, state legislatures attempted to mandate the establishment of learning outcomes and reporting of assessment results. Although about one half of all states had made some progress toward this end by 1990, Michigan was not among them. This was probably due in part to the constitutional autonomy afforded to many of our universities as Morrill land-grant institutions. By the late 1990’s, however, many of the state-based assessment efforts in Higher Education began to lose some of their steam. A lack of sufficient funding and the more pressing needs of K-12 assessment efforts probably contributed most to this. In their place, many of the major accreditation bodies began to get more involved in the assessment of Higher Education. Most of the assessment recommendations from these bodies continue to be strongly influenced by the Spelling report, “A Test of Leadership”5. The Higher Learning Commission North Central Association (our accrediting body) has recently endorsed a statement requiring that institutions:

Yet despite more than 30 years of effort by many university faculty members and committees, accrediting agencies, and state and federal legislators, very little progress has been made in improving either student learning or its assessment. While attending (and presenting at) 6national assessment conferences, it has occurred to me that the assessment of student learning is still in its infancy in many sectors of Higher Education. A surprising number of institutions are still grappling with the very first steps of creating meaningful assessment processes - establishing operational definitions of terms, setting goals, and crafting learning outcomes.

It is up to us to embrace this process to improve our programs and our student’s learning.

You May Also Enjoy

And so it begins